Erasmus – The Praise of Folly

In this article, I am sharing with you the text and slides of a presentation I did at university in December 2016 for my European Literature class. It has also been published on the website Les Lettres Européennes, partly managed by my then professor. Please keep in mind that the following text has been composed to be spoken out loud and not read. 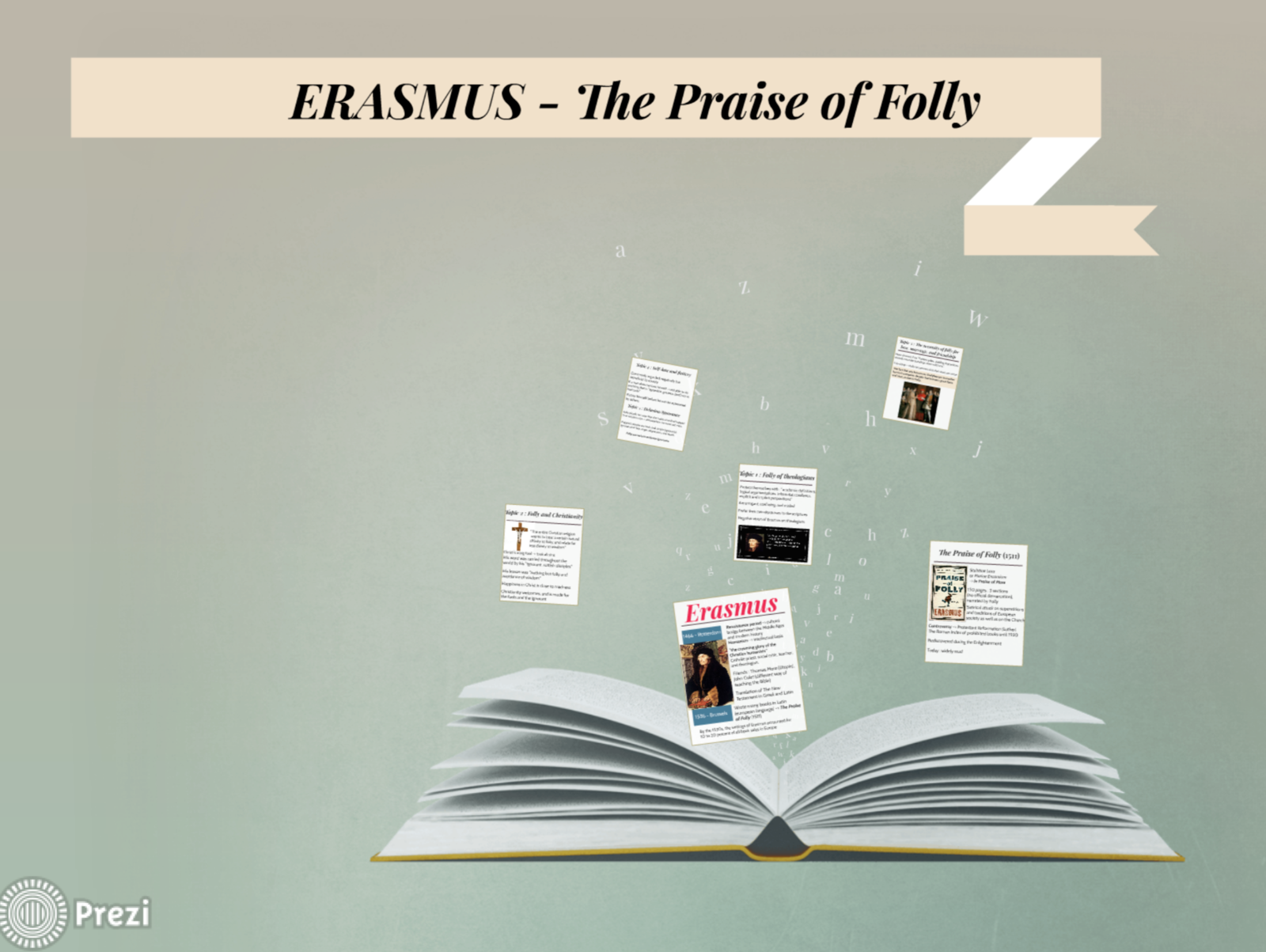 Erasmus - Introduction
Erasmus was born in Rotterdam in 1466 and died in 1536 in Brussels. He is considered as one of the first and one of the most important humanist writers. He lived during the Renaissance period, which was the cultural bridge between the Middle Ages and Modern history. Humanism is a movement that shows real faith in Human Nature and is the intellectual basis of Renaissance. Erasmus was called "the crowning glory of the Christian humanists".

Actually, he was a Catholic priest, a social critic, a teacher, and a theologian. He had many friends and intellectual counterparts who were leaders of thought, like the British Sir Thomas More who wrote Utopia or John Colet who was teaching the Bible in a different way than what was considered the normal way. Erasmus liked that new approach of religion. This prompted him to master Greek, which would enable him to study theology on a more profound level, and to prepare a new edition of the Bible's translation. He succeeded in learning Greek by an intensive day-and-night study of three years. After that, he translated the New Testament from Greek to Latin, because he wanted to be sure of the original text of the Bible and found some differences with the existing Latin version. He also wrote many books, mainly in Latin, because that was the language used in Europe at the time and that was how all the elites were sharing their ideas around Europe.

To understand how well-known Erasmus was, it is important to say that by the 1530s his writings accounted for 10 to 20 percent of all book sales in Europe. It is also worth stating that Erasmus preferred to live the life of an independent scholar and made a conscious effort to avoid any actions or formal ties that might inhibit his freedom of literary expression. Throughout his life, he was offered many positions of honour in the academic world but he declined them all and was thus a free intellectual man. 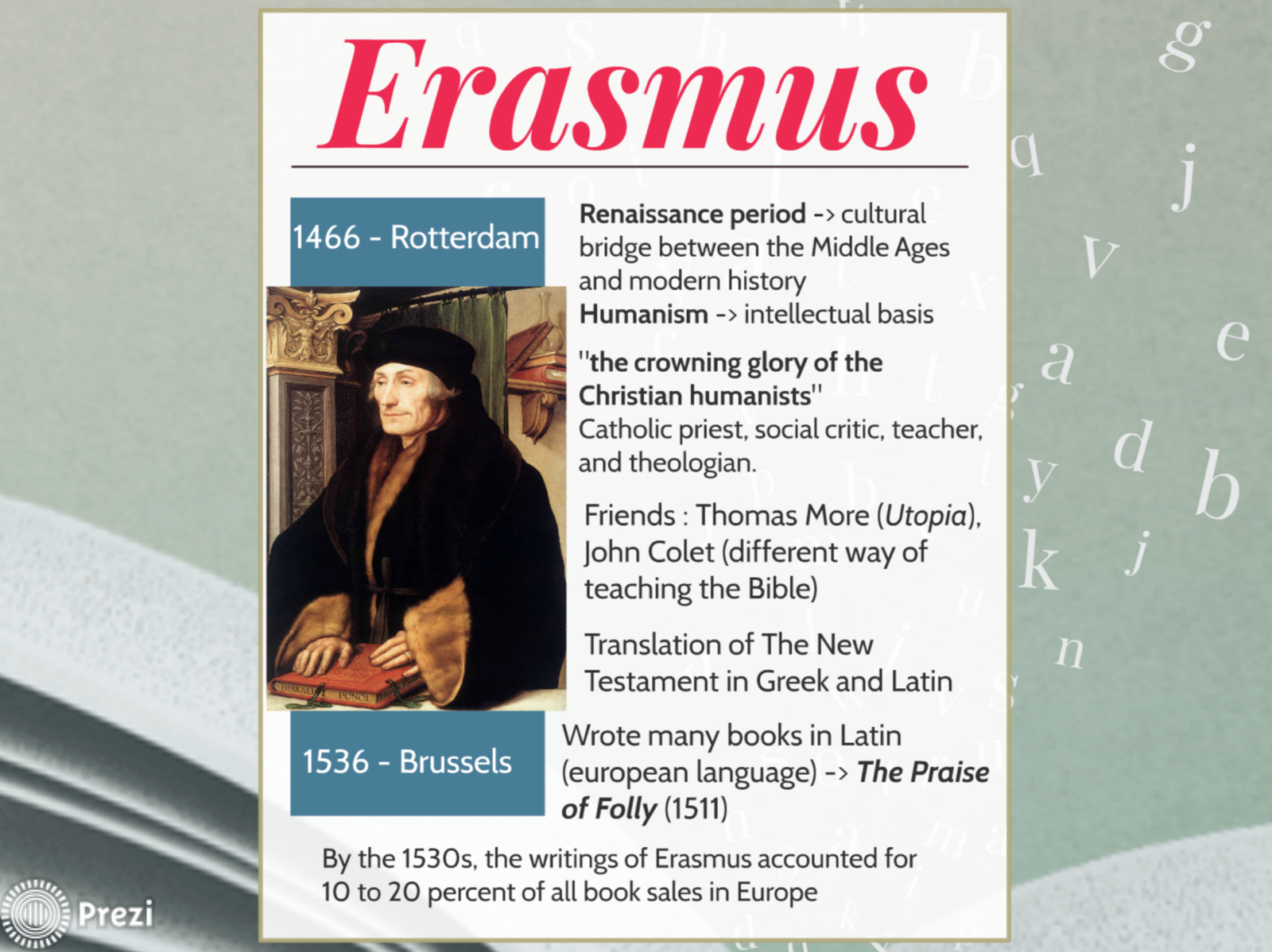 The Praise of Folly
The Latin title for The Praise of Folly is Stultitiae Laus or Moriae Encomium that can be also translated by In Praise of More. The book was written to amuse Thomas More and the preface is a letter from Erasmus to More. He writes that he was on the road from Italy to England and, rather than wasting his time, he preferred to occupy it by writing this book. This idea was suggested to him by the similarity of the name “More” with “Moria,” which is the Greek word for “folly”.

It is a short book of 150 pages divided into 3 sections, even if there is no official separation of these sections. It is narrated by Folly herself, a female personification of folly (madness, craziness), who stands before a crowd speaking. The book is a satirical attack of the superstitions and traditions of European society as well as of the Church. Even if the subject was touchy, Erasmus conceived it as minor work and was surprised of the controversy that began after the publication. Many theologians criticized it but it was still circulating throughout Europe and even the Pope, Pope Leo X, was highly amused by it.

The real controversy started with the Protestant Reformation led by Martin Luther which provoked the decline of Erasmus's reputation, as he would not fully throw his support behind the Catholic Church. And, 20 years after his death, The Praise of Folly was placed on the Roman Index of prohibited books. It is, in reality, during the Enlightenment that Erasmus was rediscovered and is today widely read. Every 1st of April, the city of Rotterdam celebrates the publication of The Praise of Folly, that we will now analyze more deeply. 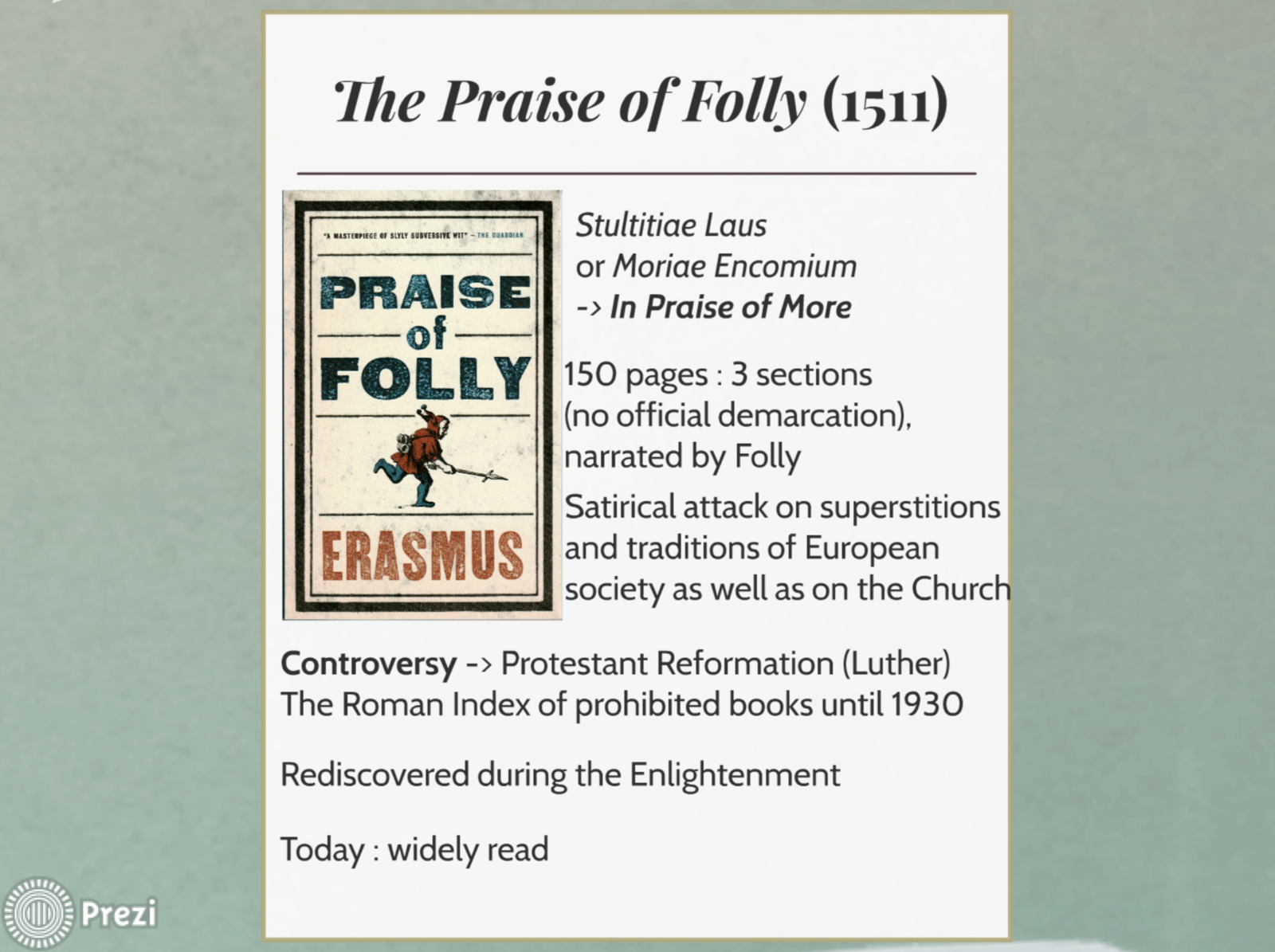 Topic 1: Folly of theologians
First of all, Folly, the main character, explains that theologians protect themselves with "academic definitions, logical argumentations, inferential corollaries, explicit and implicit propositions" but are in reality arrogant, confusing, and misleading. They prefer their interpretations to the scriptures, the real biblical texts, and they mold, change, and interpret these texts to fit their theses. For Folly, and therefore for Erasmus, Christ's message of simplicity is lost to these men who live in luxury. We thus see the harsh tone that Folly has and what vision Erasmus had of theologians, even if he was himself one. A famous quote is "It's the generally accepted privilege of theologians to stretch the heavens, that is the Scriptures, like tanners with a hide." 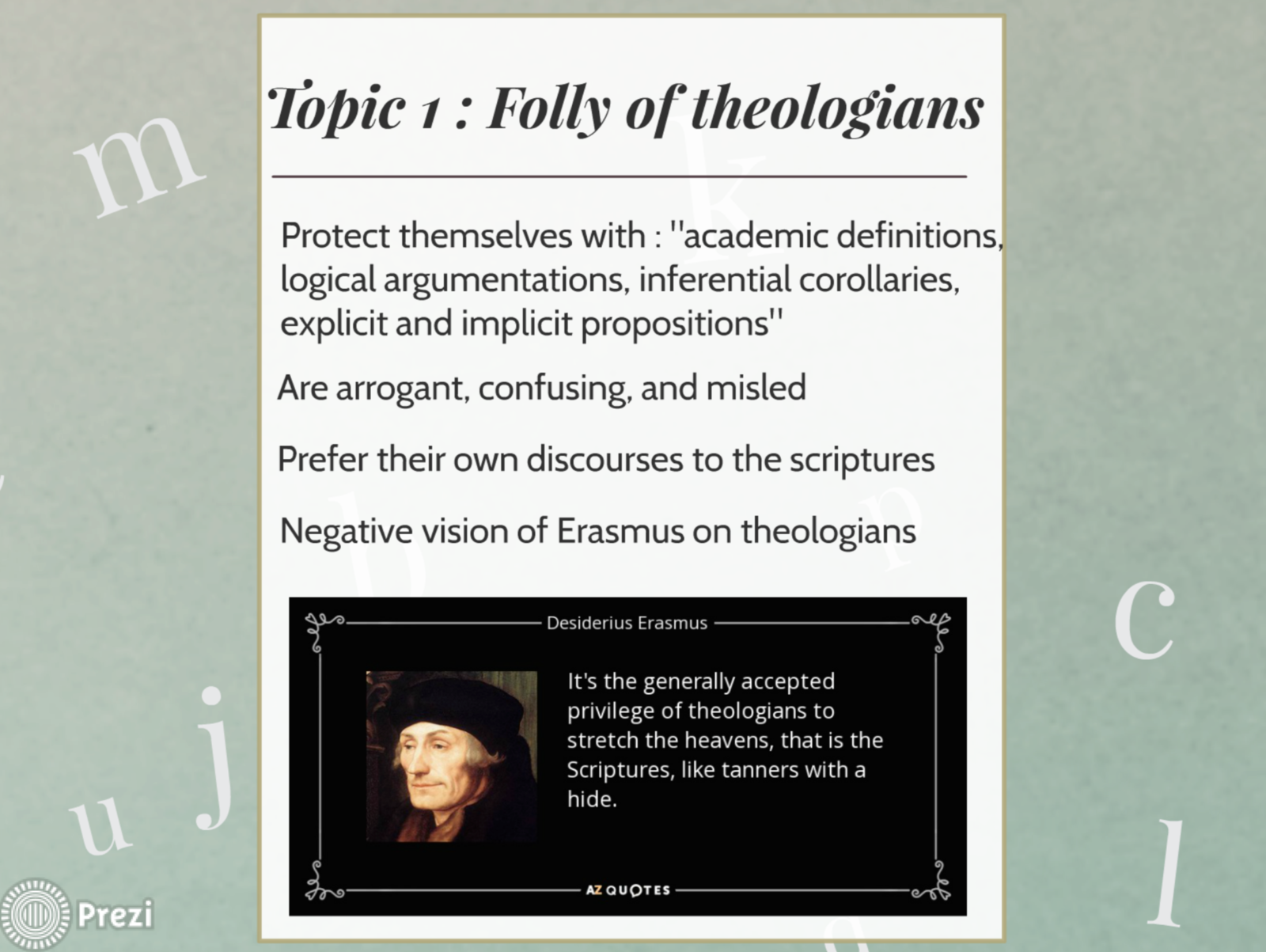 Topic 2: Folly and Christianity
Most of us might assume that Christianity is more dedicated to wise men than to fools, but Erasmus writes that "the entire Christian religion seems to bear a certain natural affinity to folly, and relate far less clearly to wisdom". Christ himself is the biggest fool of all because he took all the sins of mankind and became a sin itself. His word was carried throughout the world by his "ignorant, sottish disciples" and his lesson was "nothing but folly and avoidance of wisdom". For Erasmus, happiness in Christ is close to madness, thus revealing the essential thesis of the author: Christianity welcomes, and is made for, the fools and the ignorant. These arguments are very much responsible for what made Erasmus's work so controversial upon its publication. 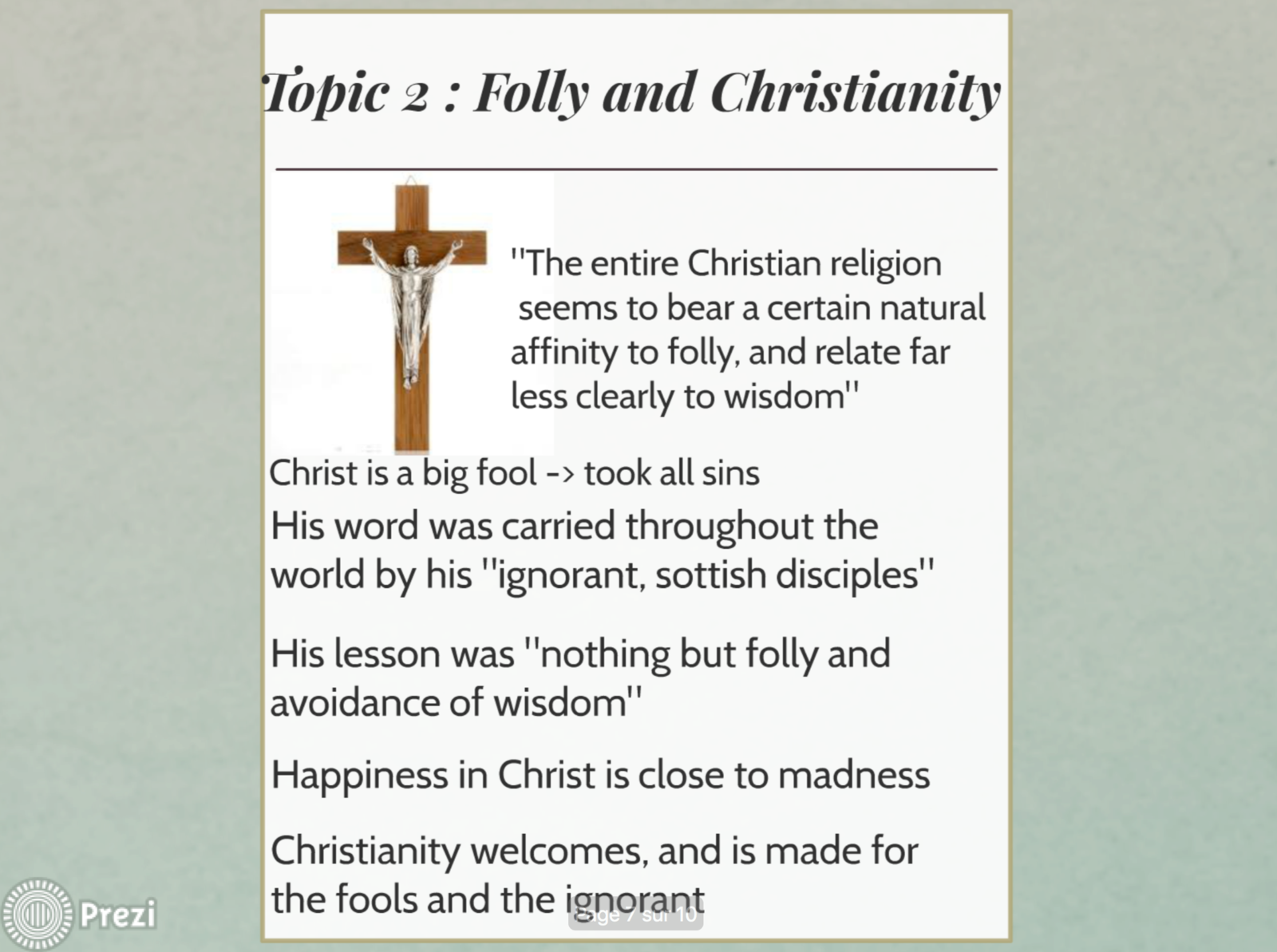 Topic 3: The necessity of folly for love, marriage, and friendship
Folly is necessary for all relationships on earth, particularly marriage and friendship. There would be so many more divorces if marriage was not made easier by "flattery, jokes, yielding dispositions, mutual misunderstandings, dissimulations". Husbands and wives can overlook each other's flaws and see their spouse as ideal thanks to the help of Folly. Friendship also benefits from her, as friends have to convince themselves that their friends' shortcomings are insignificant and their vices are their virtues. The fact that any human can find pleasure in another human's company, despite that human's great flaws and vices, is due to Folly. 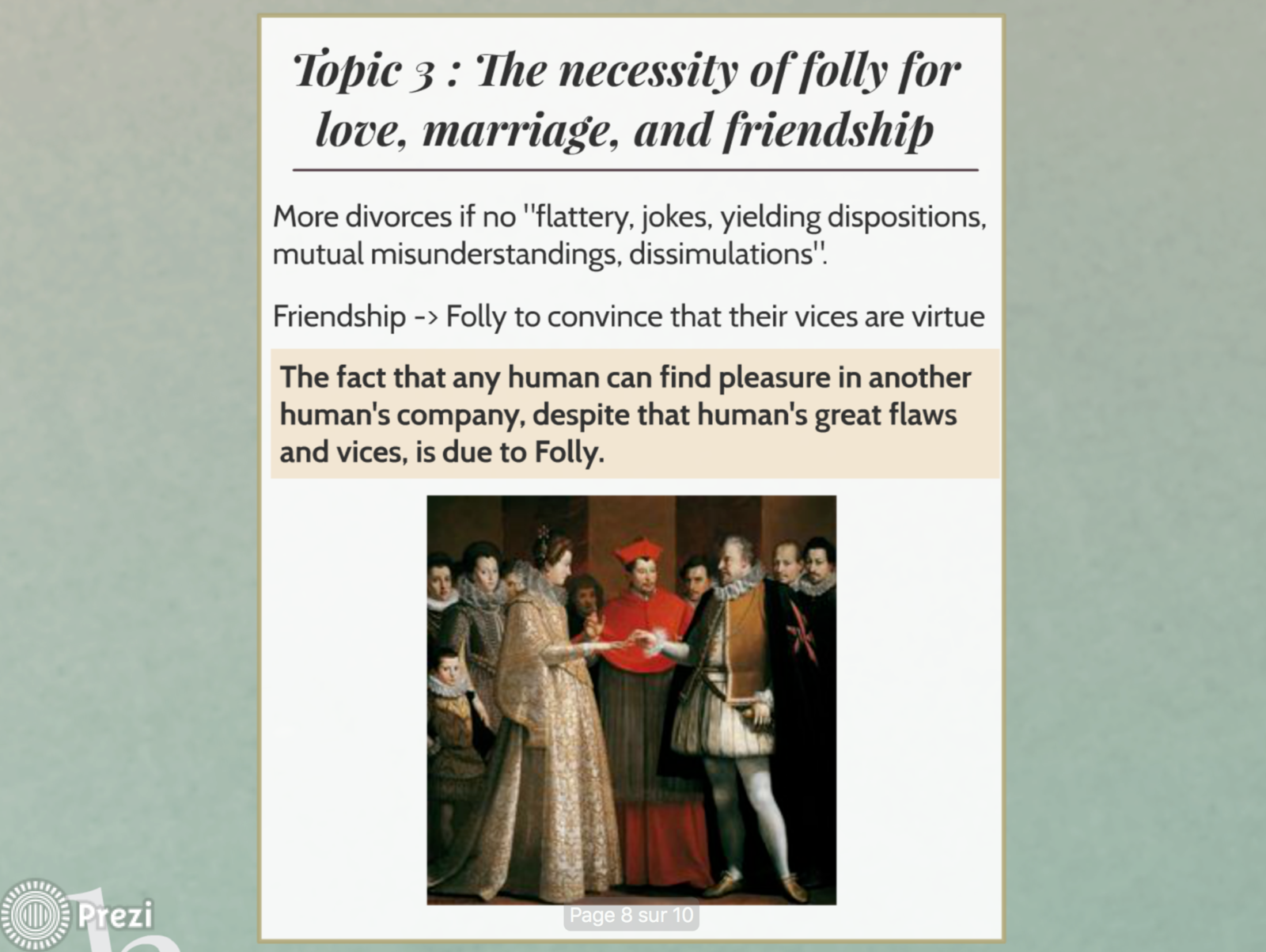 Topic 4: Self-love and flattery
Both are commonly regarded in a negative light, but Folly demonstrates how beneficial they are to society. If a man does not love himself, he will not be able to do anything that is "agreeable, gracious, [and] not in bad taste". He has to flatter himself a bit before he can be esteemed by others. The character of Folly tells that pure honesty and truth can be dangerous and that flattery is helpful and even virtuous. Thus, both self-love and flattery help mankind live their lives, forget about their problems, and achieve great things.

Topic 5: Delusion/Ignorance
Folly pleads her case that she makes mankind happier than wisdom does. She argues that a man is happier when he does not realize the ugly truth of the world and that philosophers, who claim to know the mysteries of existence, are very sad men. Wisdom does not bring contentment and the happiest people on earth are the fools and the ignorant men. Ignorant of fear, anger, depression, and death. So Folly counsels her listeners to embrace ignorance. 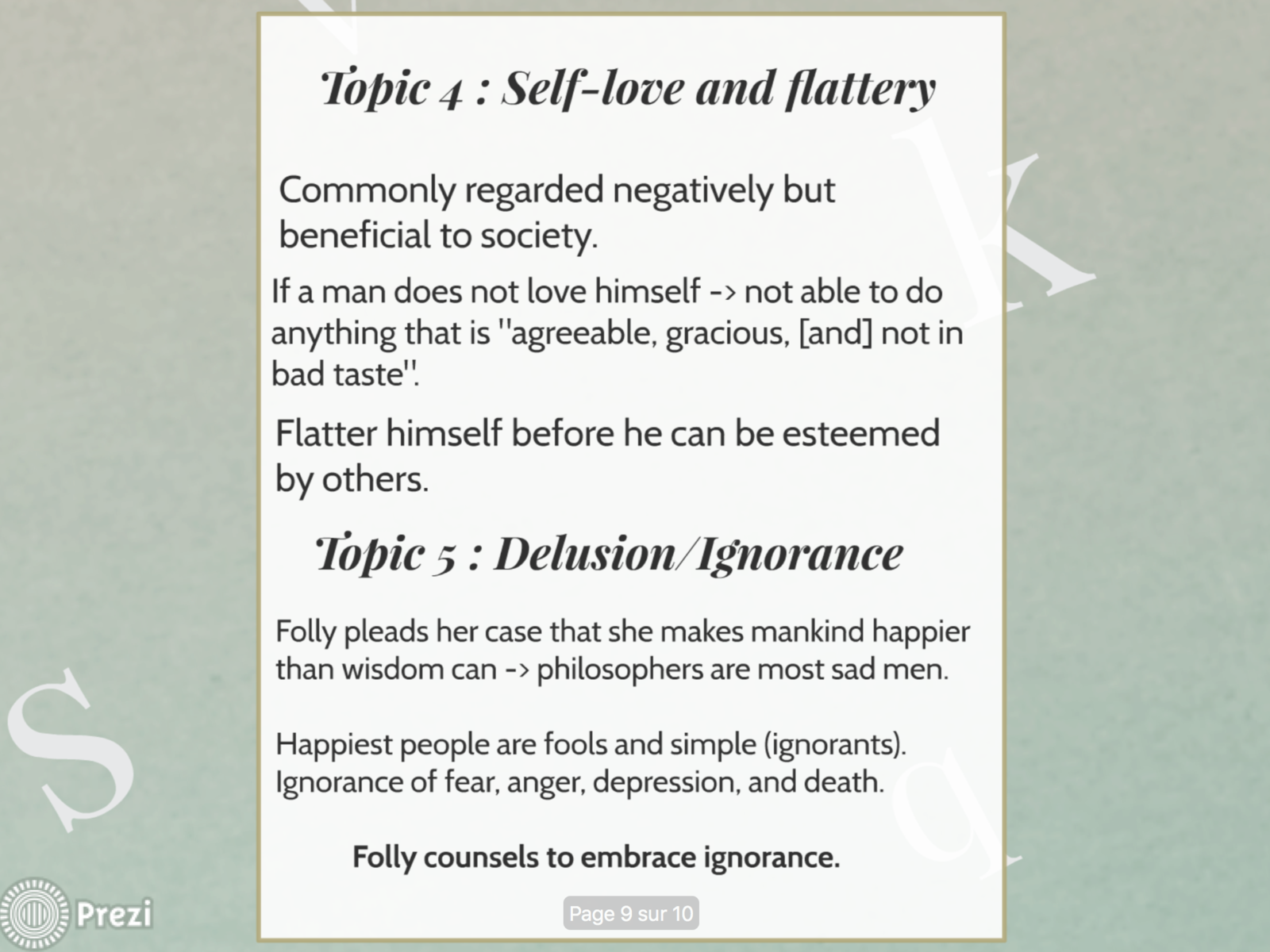 Conclusion
So what is important to remember about The Praise of Folly, is that Folly can be found everywhere, in every topic of life. Therefore, paradoxically, to live a healthy life it seems necessary to have Folly in us.


Thank you for reading this article. If there are any mistakes, please contact me and I will make the according changes. This school presentation was meant to only be 10 minute-long and could therefore not be detailed. It is just an overview of Erasmus' Praise of Folly and not at all an exhaustive research work.