An overview of Romanian literature

In this article, I am sharing with you the text and slides of a presentation I did at university in December 2016 for my European Literature class. It has also been published on the website Les Lettres Européennes, partly managed by my then professor. Please keep in mind that the following text has been composed to be spoken out loud and not read. 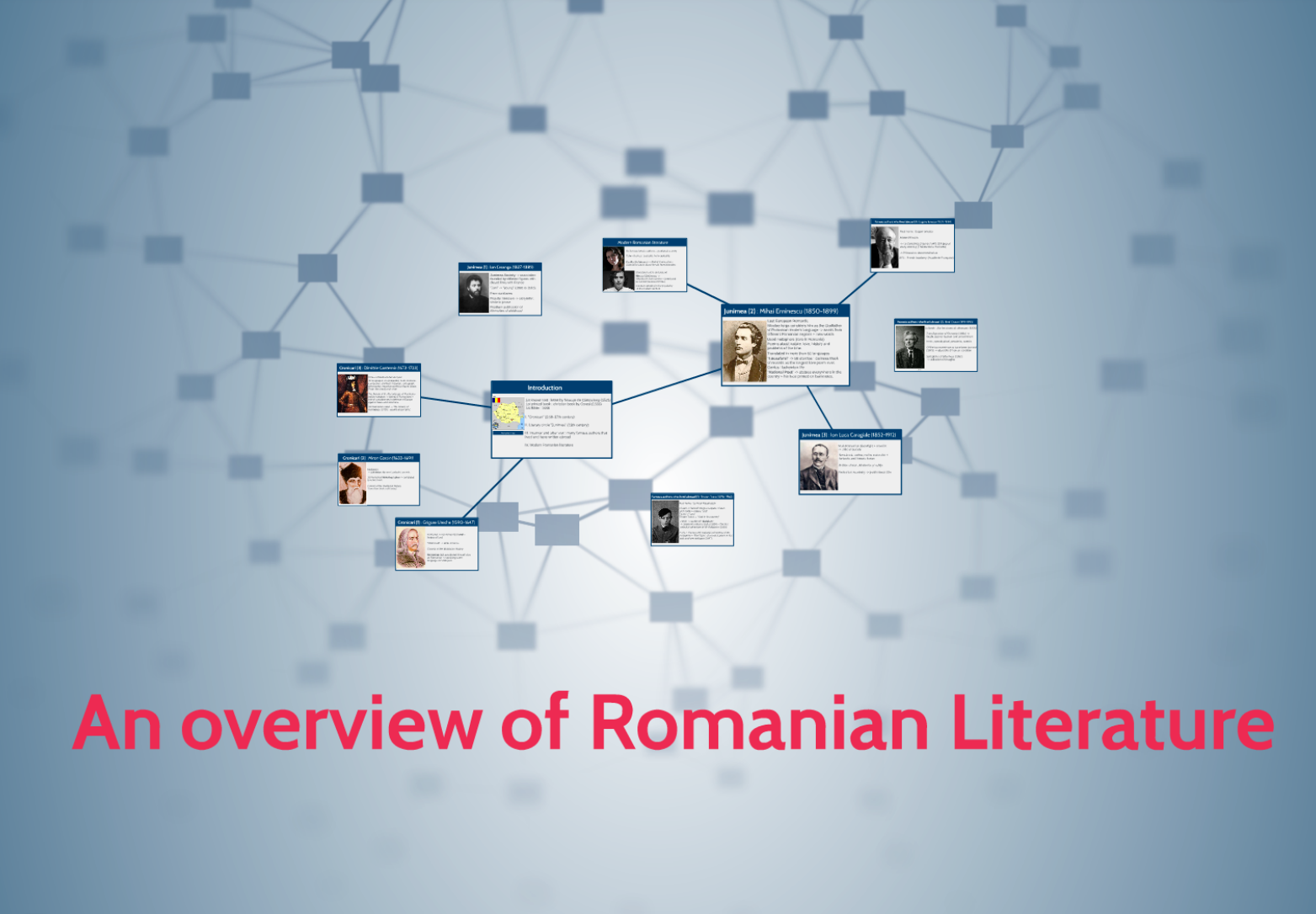 Introduction
I will start by saying that Romania has a fairly long history in terms of literature. The first known text was a letter written in 1521 by Neacsu din Câmpulung, the first printed book was a Christian book by Deacon Coresi in 1559 and it is in 1688 that the first Bible was published in Romanian.

Today, I will present to you the main authors of different Romanian literary movements. We will talk about authors who are called "Cronicari" of the 16th and 17th centuries. Then authors of the literary circle "Junimea" during the 19th century. After that, we will see an important period which is the interwar and the after-war with many famous authors who lived and wrote abroad. And in the end, we will talk about modern Romanian literature. 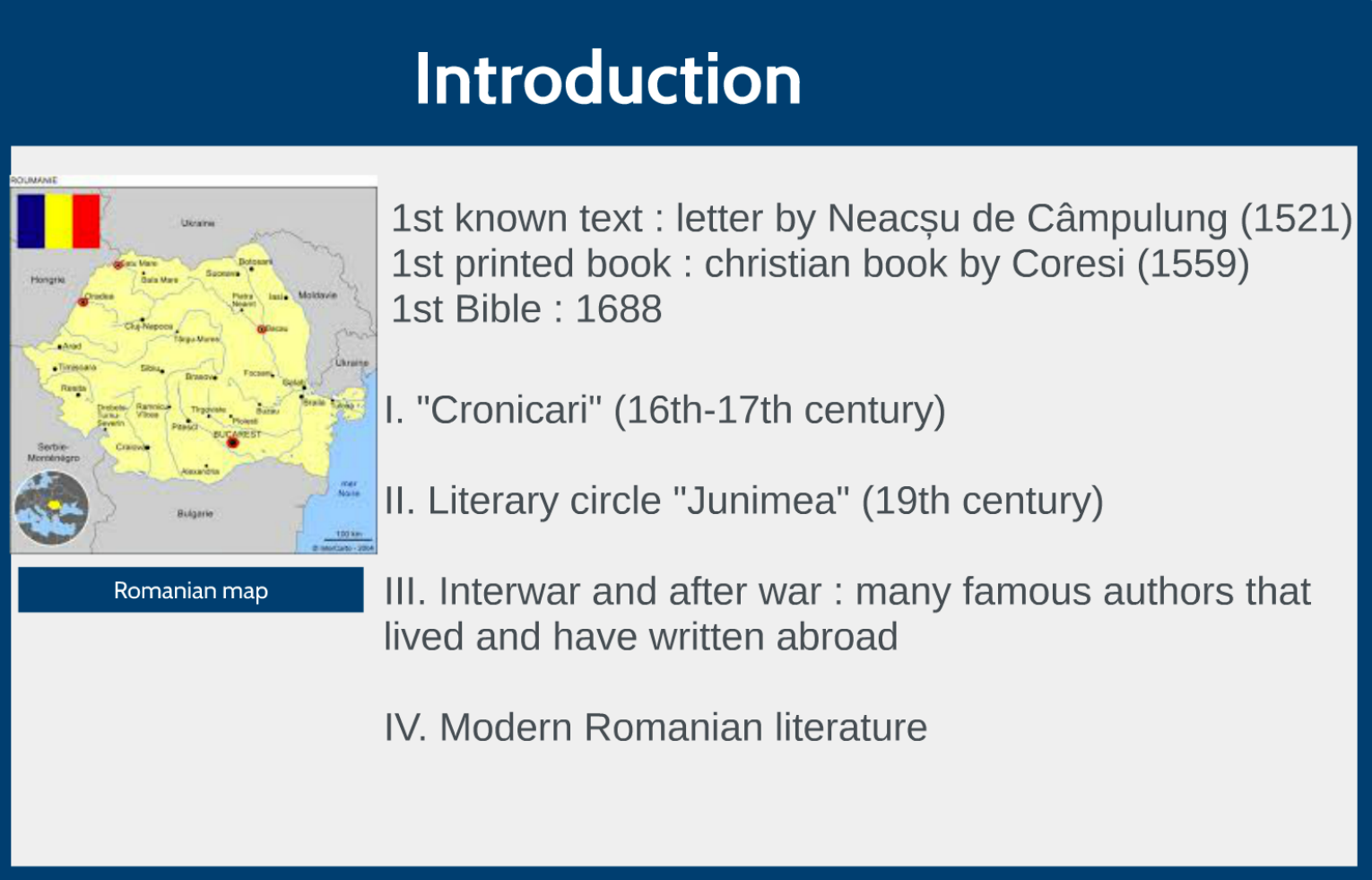 Cronicari (1): Grigore Ureche (1590-1647)
Humanism was a European movement that showed real faith in Human nature. The Romanian authors of this period, even if they are also considered Humanists, have not written about Man but more about land and the history of this land. They were thus doing chronics and that is why they are called "cronicari".

Grigore Ureche is one of the most important Romanian authors of this period and his only book was Chronic of the Moldavian history. He was actually Moldavian but he also considered himself as Romanian because he was speaking the same language as the Vlachs, who are inhabitants of a Romanian region. 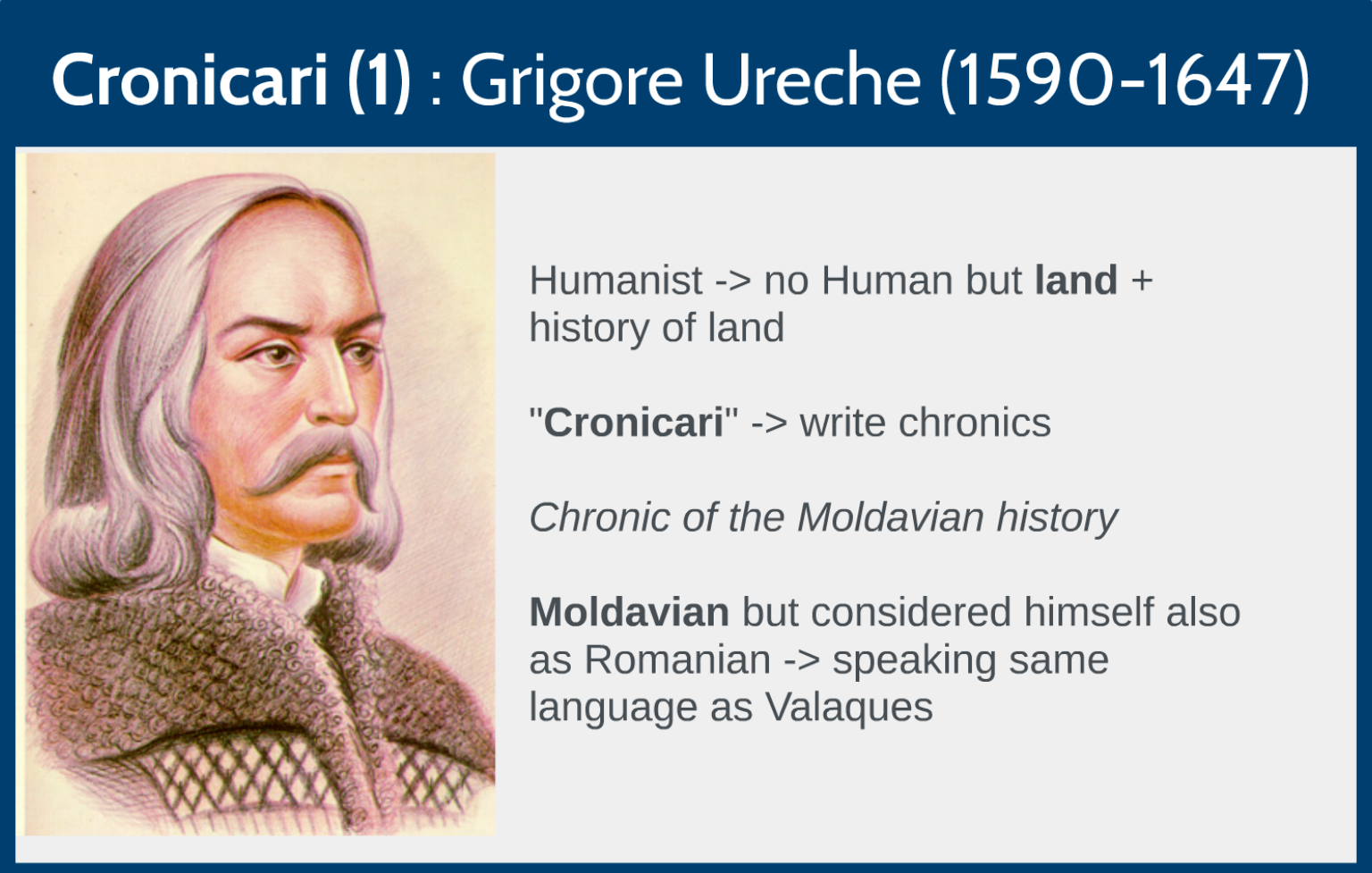 Cronicari (2): Miron Costin (1633-1691)
Another major figure of this period is Miron Costin, who also was Moldavian. He was a politician, a diplomat, polyglot and very patriotic. He is considered as the first Romanian historiographer because he completed Grigore Ureche's book by adding new historical elements and the latter is now called Chronic of the Moldavian history (from Aron Voda until today). He also wrote many other pieces of literature like poems and translations from Greek and Latin books. 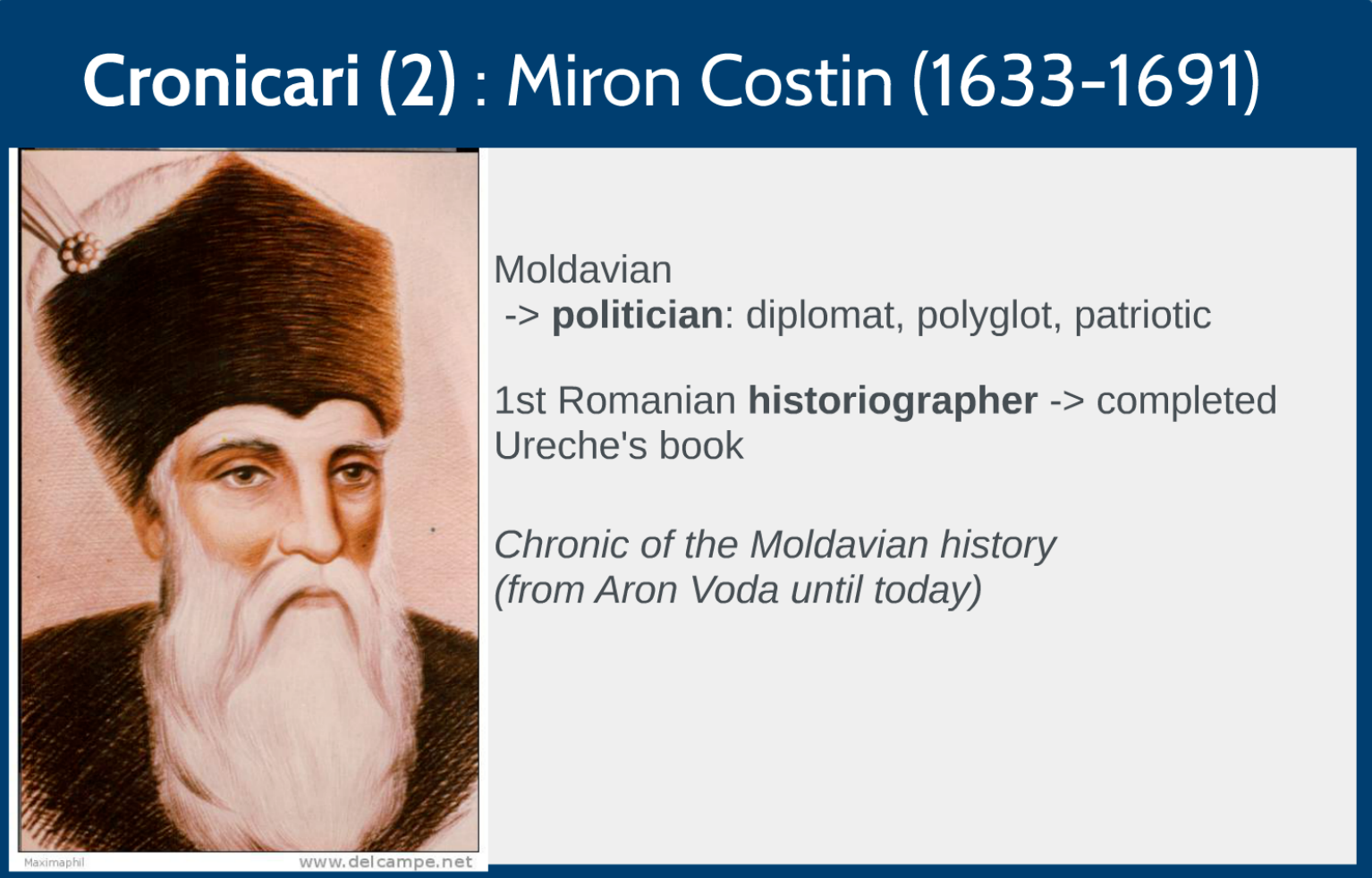 Cronicari (3): Dimitrie Cantemir (1673-1723)
Dimitrie Cantemir was the Prince of Moldavia for one year. He could speak 11 languages, was an encyclopedist, a mathematician, a compositor, an architect, a historian, a cartographer, a philosopher, a very important politician figure, close to the Russian Tsar Peter the Great, and of course he was a writer. He wrote many books but the most important one is his last: The history of the long age of Roumano-moldo-vlachs. It shows the role of the main Romanian principalities (which are called "danubiennes") in defending Europe against the Tatars and then against the Ottomans. He also wrote books on the Ottoman civilization, on Islam, on the Arabic language and published the first Romanian novel in 1705, The History of hieroglyphs, which is a political pamphlet. 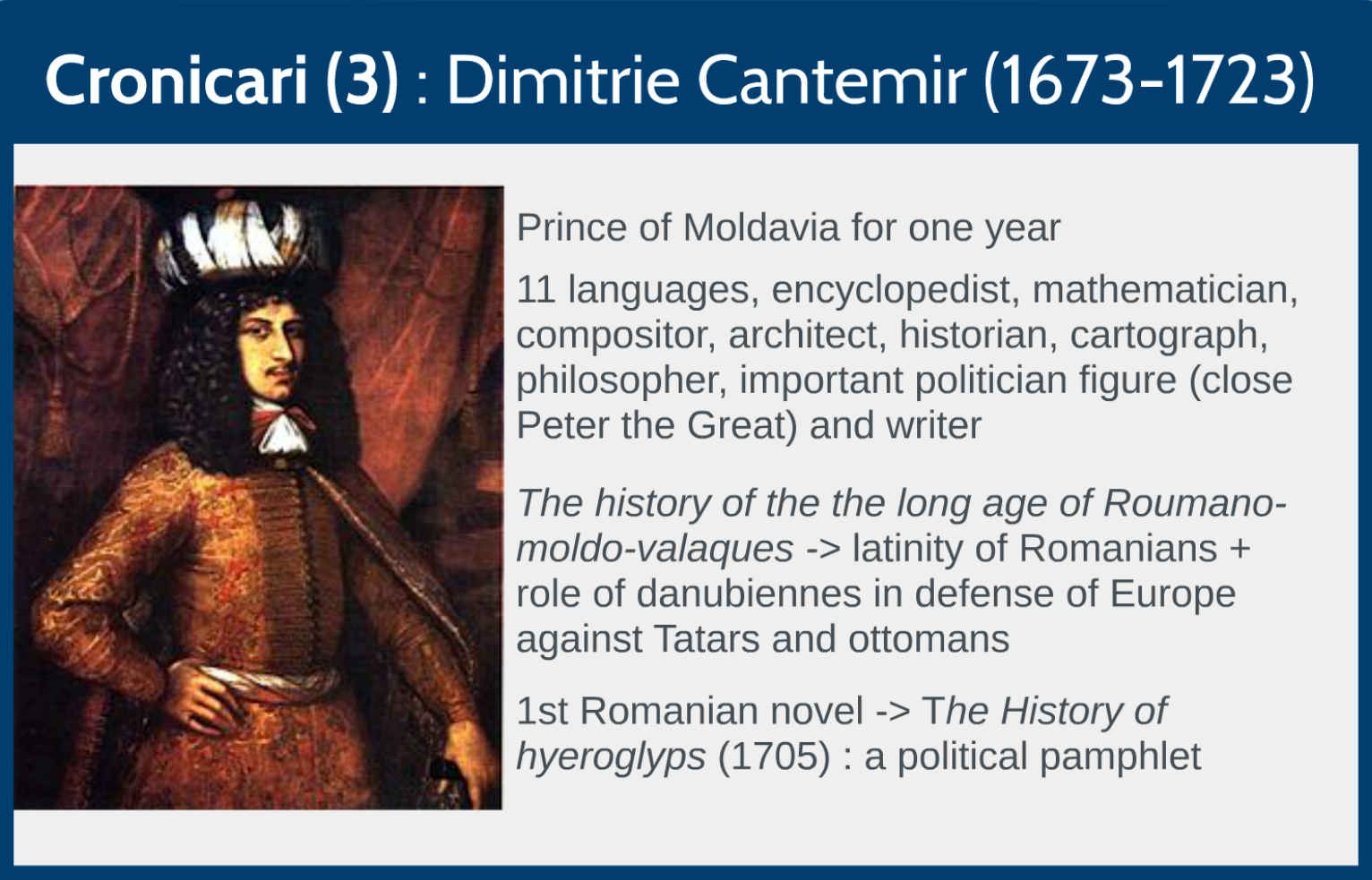 Junimea (1): Ion Creanga (1837-1889)
Now we will talk about another period, which is the 19th century, with authors from the Junimea literary circle. The Junimea Society is actually an organization founded by different figures who had close links with France. The term "Junimea" comes from the word "Juni" which is an old word to say "young". Junimea started in 1880 and ended in 1916, after the end of the First World War, due to the fact that many members helped Germany and not France during the war.

First of all, we will talk about Ion Creanga. He comes from a rural area and his works are inspired from his modest life that he describes with sincerity and a bit of naivety. He wrote many short stories for children with a moral at the end and, for that, he can be compared to French authors such as François Rabelais or Charles Perrault. However, he really became famous after his death with the posthumous publication of his book Memories of childhood. 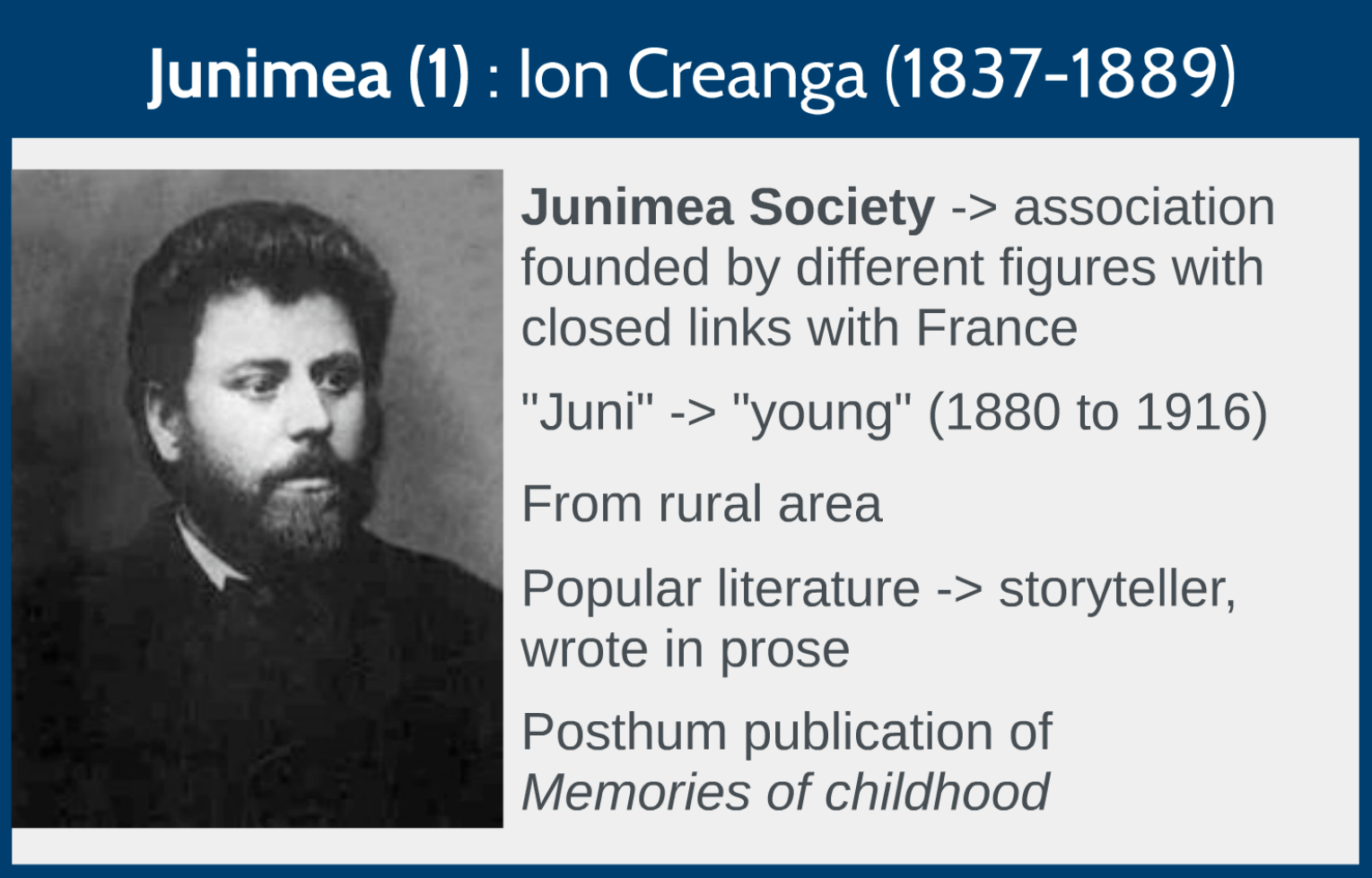 Junimea (2): Mihai Eminescu (1850-1899)
Now I will present to you one of the major figures of Romanian literature, who is also the last European Romantic: Mihai Eminescu. The famous historian Nicolae Iorga considers him as the Godfather of Romanian modern language because his texts were full of words from different Romanian regions and he created new words with his philosophical readings. He also was one of the first authors to use metaphors which were really rare in Romanian poetry. He wrote many poems on a large range of themes like nature, love, history and he was one of the first poets to write about Romanian contemporary problems. His poems were so famous that they were translated into more than 60 languages. His most important one is called "Luceafarul", which is "Hypérion" in French and "Evening Star" in English. This 98 stanza-long poem is in the Guinness Book of Records as the longest love poem ever.

Eminescu is considered as a genius due to his works but also because of his bohemian life: he didn’t want to have any diplomas, didn’t want to be on a high social rank, didn’t want to be rich, didn’t want to marry and he refused all the prizes that were proposed to him. During his last years, he was mentally ill, suffered from psychosis, was maniac-depressive and he probably died of syphilis. Today, he is considered in Romania as the "National Poet" and is a real symbol. There are statues of him everywhere in the country and his face is printed on banknotes. 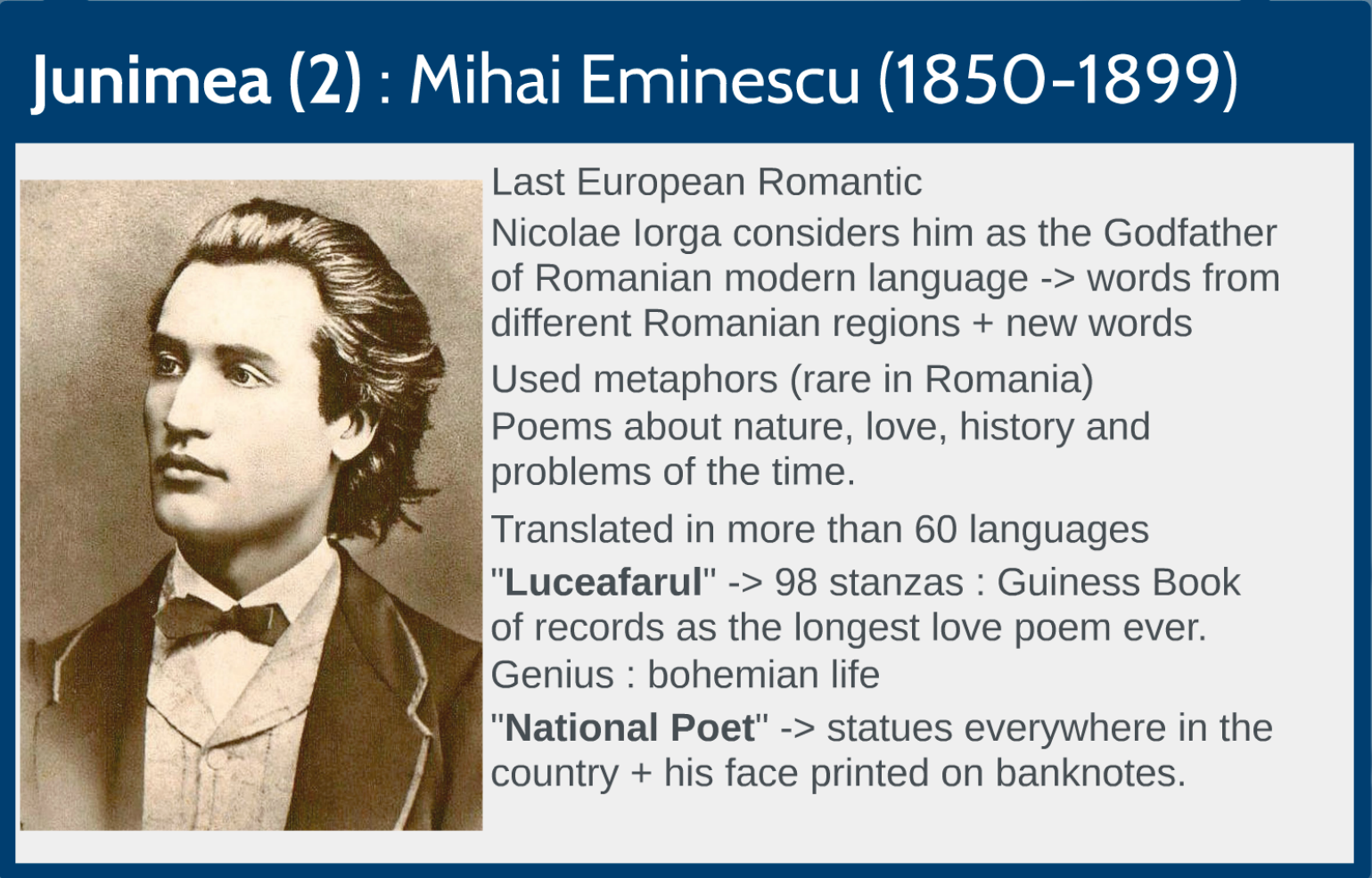 Junimea (3): Ion Luca Caragiale (1852-1912)
Ion Luca Caragiale is considered as the main Romanian playwright and novelist thanks to his works that are critics of the Romanian society. He is seen as a neoclassic author, a realist and a naturalist but some of his works are also fantastic or turned towards historical fiction. His main books are In time of war and Momente şi schiţe (there is no real translation for the word "schiţe"). Caragiale became a member of the Romanian Academy posthumously. 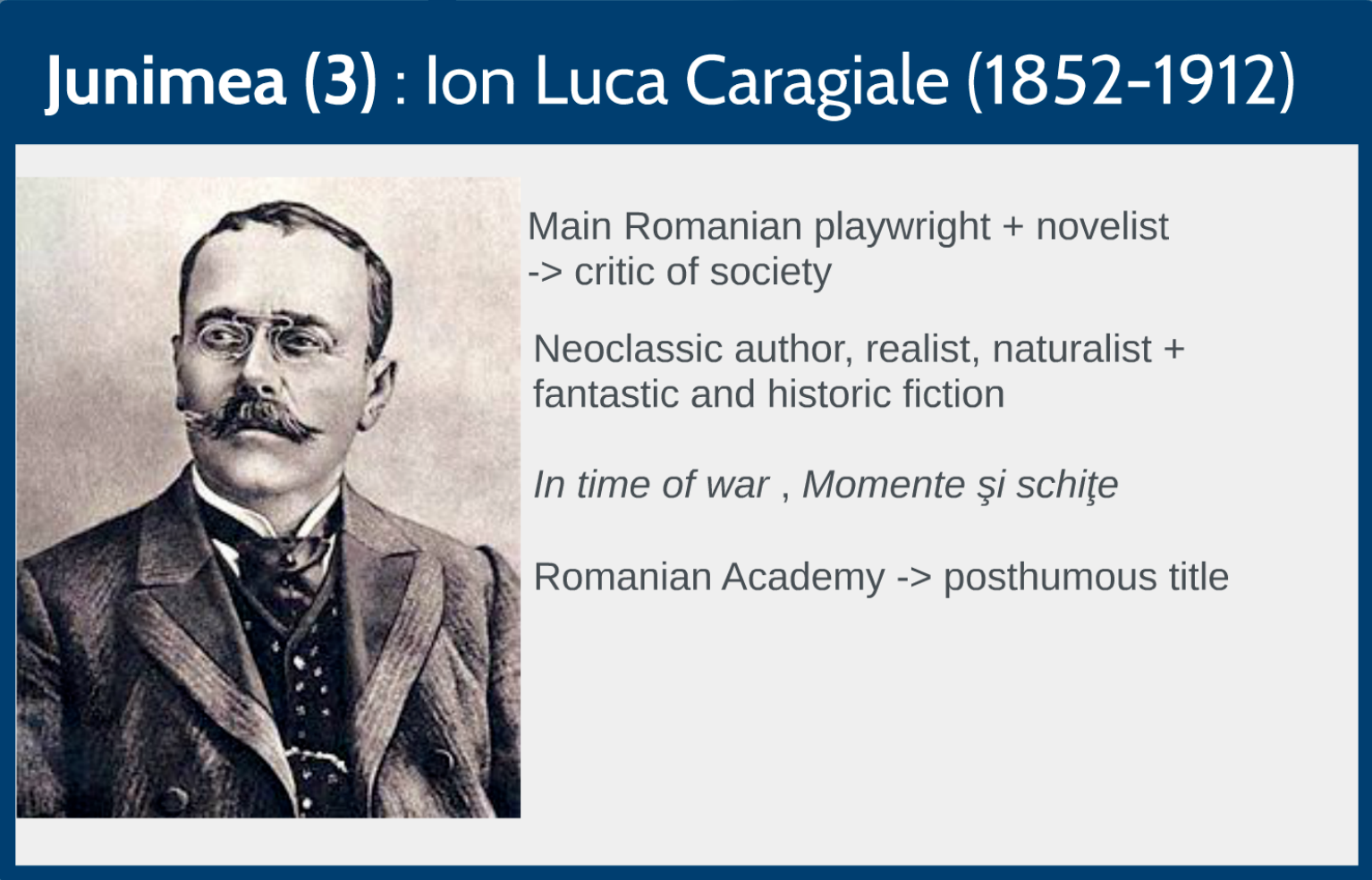 Famous authors who lived abroad (1): Tristan Tzara (1896-1963)
We will now talk about important authors that you may have heard about because they have lived abroad, and for most of them, have lived in France and have written in French.

First of all, Tristan Tzara whose real name was Samuel Rosenstock. Tristan is a reference to the hero of Wagner’s opera Tristan and Isolde and means "sad". Concerning "Tzara", it has the same pronunciation as the Romanian word for "country" which is "țara". Therefore we can understand that he was "sad in his country". He lived some years in Zürich and with some friends, he created the movement "dada" or "dadaism" which arose as a reaction to World War I and to nationalism. It is a questioning of all the conventions and political constraints. During this period Tristan Tzara wrote books such as Seven Manifestos dada (1924) or The first celestial adventure of Mr. Antipyrine (1916). Later, he went to Paris, made some friends as André Breton or Louis Aragon and wrote other books such as The Second Celestial Adventure of Mr. Antipyrine or The Flight: dramatical poem in four acts and one epilogue (1947). 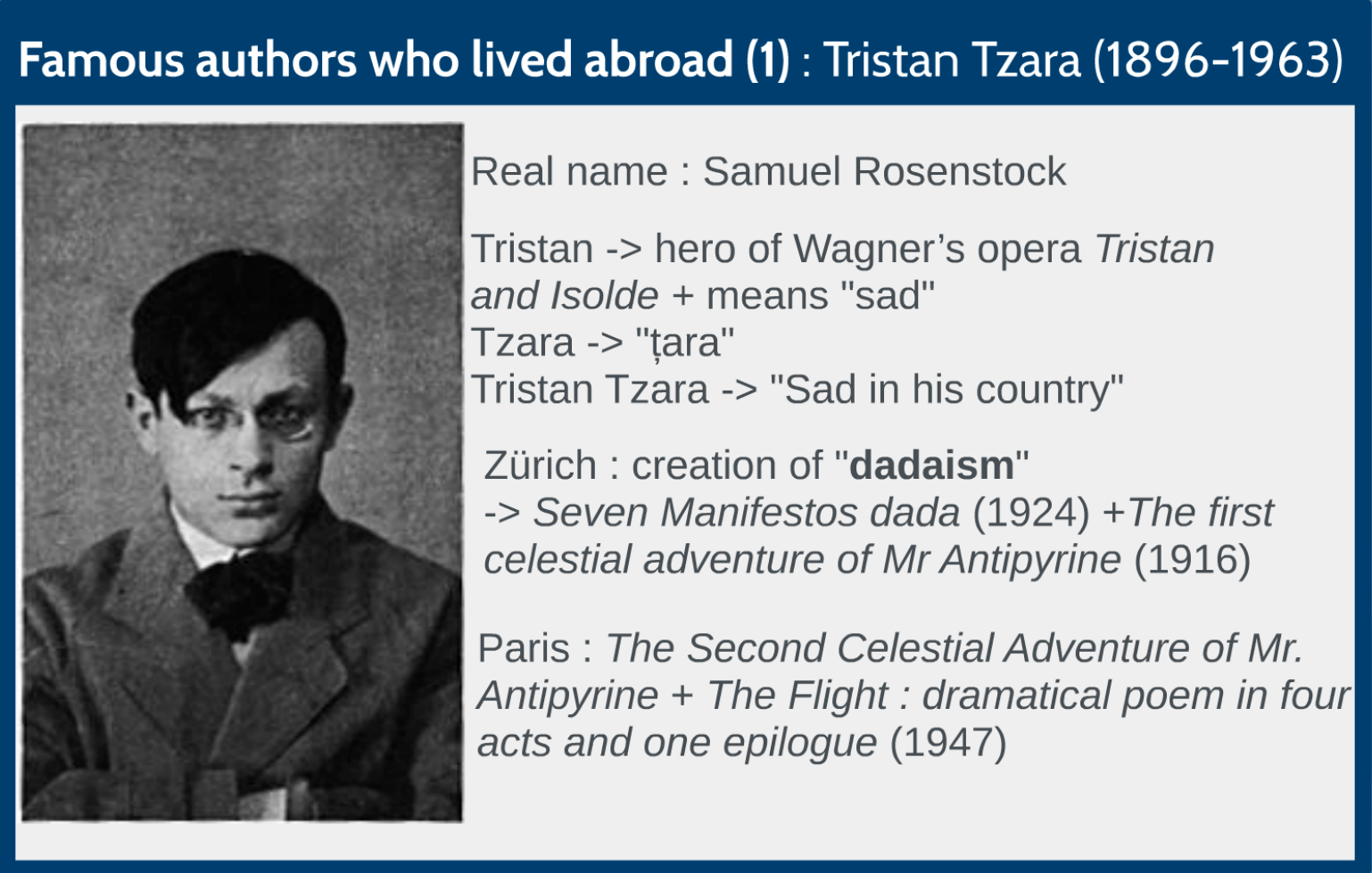 Famous authors who lived abroad (2): Emil Cioran (1911-1995)
Let's now talk about Emil Cioran. He was first writing in Romanian but he was refused to stay in Romania because of the communist regime. So he went to Paris and there wrote in French. One of his important books is Sur les cimes du désespoir (1933). When fascism and antisemitism arose he fought against it and wrote Transfiguration of Romania (1936). One year later, he went to Paris and never returned to Romania, where after WWII, the communists prohibited his books. All his writings are ironic and apocalyptical. He was a pessimist and a skeptic and this can be really seen in his books Of the inconvenience to have been born (1973), which is about the absurdity of life and the human condition, or Syllogisms of bitterness (1952), which is a collection of thoughts. 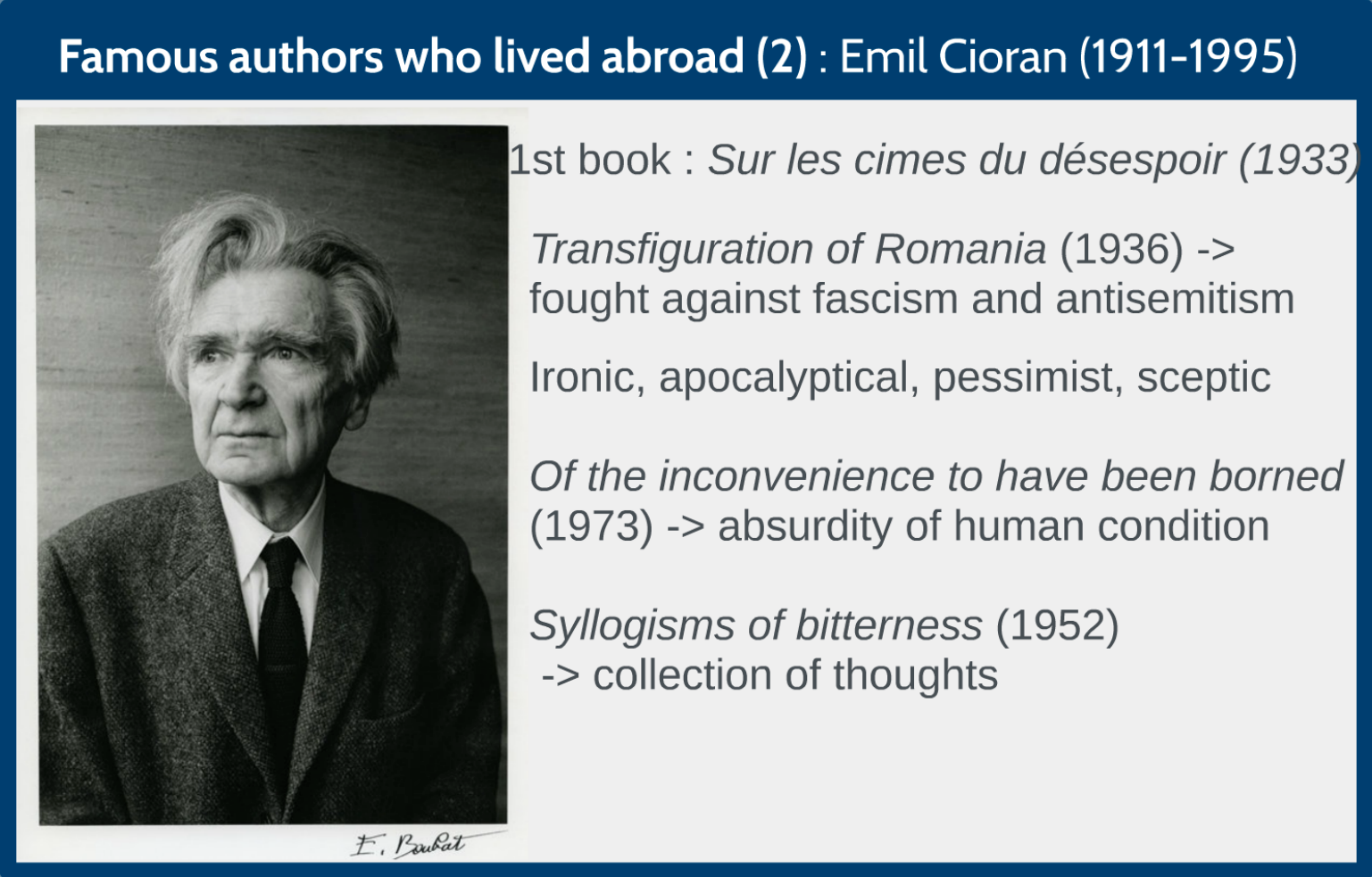 Famous authors who lived abroad (3): Eugène Ionesco (1909-1994)
And the last author of this category is Eugène Ionesco. His real name was Eugen Ionescu but he changed it to sound more French. He lived with his mother and sister in France during WWI. In 1925 he went to live with his father in Romania but Ionesco hated him because he was an opportunist, a fascist and a communist. So he came back to France. He is well known for his absurd theater. He composed his main play in 1947, La Cantatrice chauve, which is still played today every evening at the Théâtre de la Huchette in Paris. In 1959 he wrote another important play Rhinocéros which is about totalitarianism. He published, of course, many other plays or books and arrived at the French Academy (Académie Française) in 1970. 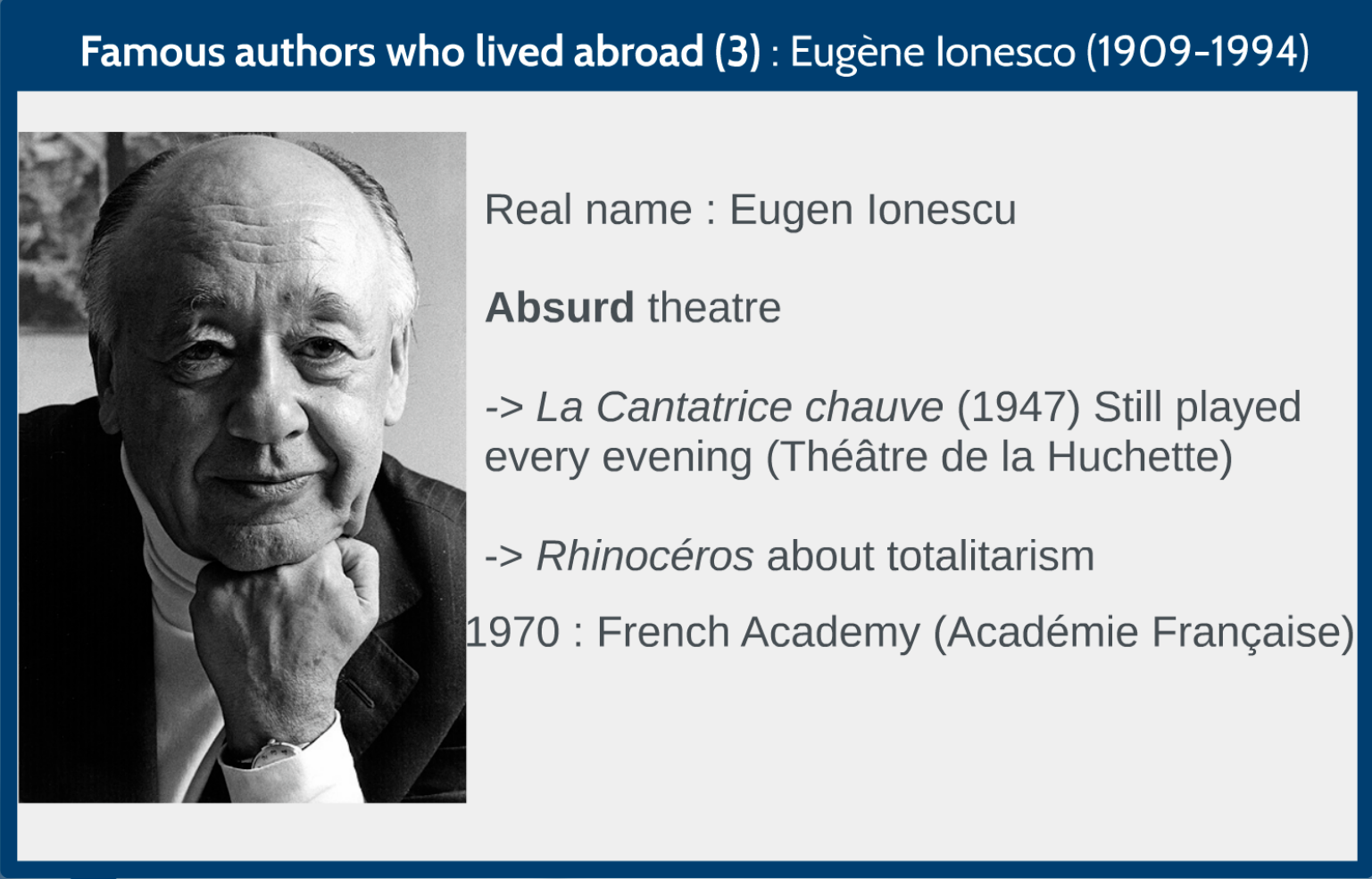 Modern Romanian literature
As you may have seen, there are no famous female authors in Romania. The country being patriarchal, some themes are taboo in literature such as sexuality or homosexuality. But some new authors try to change that as Cecilia Stefanescu who wrote Morbid Connections in 2006, a book about female homosexuality, which made a scandal in Bucharest.

There is another significant problem with Romanian literature: it is hard to understand. In fact, the communist dictatorship under Ceaușescu forced the authors to hide what they were saying under lots of diversions and don’t really go straight to the point. For example, the prose of the main modern author, Mircea Cărtărescu, is really hard to understand. Yet, he received a lot of prices for his novels and essays from all over the world (such as American, French, German, Swiss or Italian prizes). His main novels are Why do we love women ? (2008) and Le Levant (1990).

Today we observe a rebirth of Romanian literature after 50 years of communism. 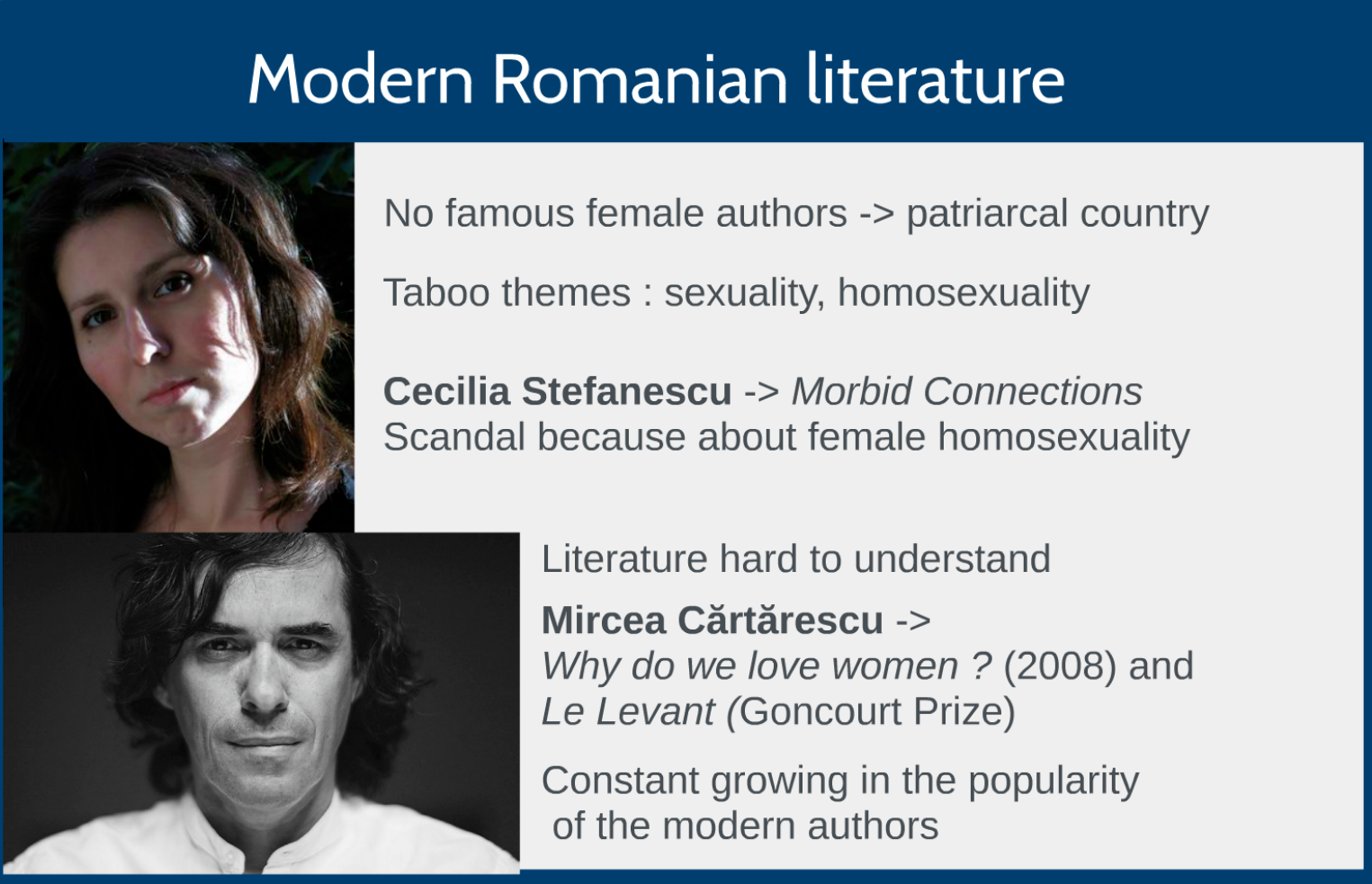 Thank you for reading this article. If there are any mistakes, please contact me and I will make the according changes. This school presentation was meant to only be 10 minute-long and could therefore not be detailed. As its title clearly states, it is just an overview of Romanian literature and not at all an exhaustive research work.
Bienvenue!
Entrez vos informations ci-dessous pour vous connecter.
Mot de passe oublié ?